Jeffrey Preston Jorgensen was born in Albuqueruqe, New Mexico, U.S. on January 12, 1964. His mother married Cuban immigrant, Mike Bezos, after his parents got divorced in April 1968. Mike adopted Jeff whose surname was then legally changed from Jorgensen to Bezos.

He graduated in 1986 from Princeton University with a Bachelor of Science in electrical engineering and computer science. He worked at Fitel, a fintech telecommunications start-up. He then worked at Bankers Trust and then at D.E. Shaw and Co in 1990. He became D.E. Shaw’s forth senior vice-president at age 30 and left the company in 1994 to start his online bookstore.

Back then, website listings were alphabetized which is why he wanted a word that started with “A”. He then landed on the word “Amazon”, the largest river on the planet, which seemed perfect as he intended the company to be the biggest in the world. Some other websites he registered were aware.com, browse.com and relentless.com.

He considered over 20 categories of products for his venture and ultimately chose on books. Book retailing business was highly fragmented and complicated. Matching billions of readers with millions of books was a challenge. 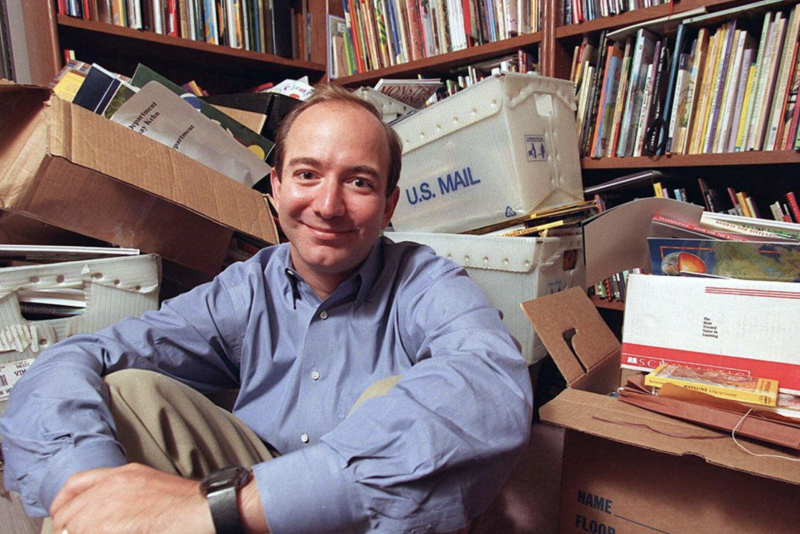 He founded Amazon in his garage on July 5, 1994. Amazon’s website was launched after a year of software development with a team of 10 employees. Goal was to offer much more selection than in a physical store at a discounted price in useful easy to search format. He accepted an estimated $300,000 from his parents and invested in Amazon. Later in June 1996, Amazon raised $8 million series A from Kleiner Perkins which was its only VC investments before going public. He warned many early investors that there was a 70% chance that Amazon would fail or go bankrupt.

The company that once rang a bell in the office every time someone made a purchase, and everyone would gather around to see if they knew the customer, is now the biggest online retailer, largest cloud service provider, and many more. 2020 operating profits of the company was $22.9 billion from sales of $386 billion.

Despite many challenges including the dot com bust, the company growth never stopped. All credit goes to the vision and leadership of the man with amusing laugh, Jeff Bezos, who recently stepped down as a CEO of the company in July 2021, 27 years after he started the company.

Jeff Bezos travelled to the edge of space in July 2021 aboard a rocket built by Blue Origin, a company he launched and owns. His mission to space is all about his environmental vision. He wants to take all heavy and polluting industry into space and keep Earth clean and beautiful. His mission will take decades, but big things start with small steps.

With more interest from billionaires and pioneers to explore space for unprecedented possibilities, the race into the space has already begun. I am pretty much excited to see space travel come possible just like we have watched in Marvel Movies going from a planet to another in a short period of time. I would also love to travel that way but not by paying millions. Well, maybe I would if I were that rich.